Giving Thanks for Rude People 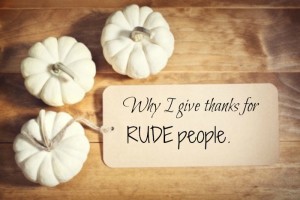 Thanksgiving is almost here. In just a few day’s I’ll be whisking around to dinners and parties and seeing people that I only see once or twice a year.

People look different when you don’t see them on a regular basis. You notice changes, moodiness sticks out more and the inevitable posturing about life kicks in.

I do it too – it seems unavoidable.

We want to tell people how well we’re doing, even if it’s not quite the truth. Conversations graze along top layer discussions about how fast kids grow up, what your business is doing and where we’ve traveled recently.

But, as the small talk dwindles, the comments seem to get more personal.

“What are you eating these days? Are you still doing the gluten free thing?”

“How well is your business doing? Are you making money?”

And my personal favorite comment, “You shouldn’t think that – read your own book.”

There’s always the option of smiling through it and asking for the gravy. There are plenty of diversions in a busy room– including walking away.

But when you do that, their comment sticks with you. You fume, even though you tell yourself to forget about it. You sit with their comment through the party and the second you’re in the car you hear yourself say “Oh my gosh! Can you believe what they said?!”

Even through the other person has moved on to comment on someone else’s food choice or single-dom, you’re still in it. Annoyed or worse.

Here’s the thing- these people who tell us that we should be eating something else or making another career choice often don’t know us that well.

They’re the strangers who just found out we don’t have kids and think our family should look like theirs.

They’re the people that we haven’t seen for a while and honestly think we should be in a different place in life.

They’re the distant family and in-laws who are looking for something to say in a conversation.

I would venture to say most of them aren’t looking to be rude. So why do these comments set us off – especially when they come from virtual strangers? It’s not because of what the other person says.

That insulted feeling comes from what we tell ourselves after the comment is said.

When people say, “How awful you can’t eat that. Do you really feel good without it?”

What runs through your mind?

Do you instantly think of all the ways you’re definitely NOT feeling good?

Do you remind yourself of the hardships you’re facing?

Do you second-guess yourself and wonder if what you’re doing is right – or just crazy?

In that sliver of space between what someone says and us thinking they’re rude, there’s a little voice commenting in our head.

We may think about the 10 pounds we just gained and how uncomfortable we are in our clothes.

Or we might run though the fight we just had with our spouse or how our kids are so grounded for that stunt they pulled on the way over.

We may think about how we don’t stack up to someone else or how we could be better.

We may think about how stressed out we are, or how our job is killing us.

It’s that little voice in our heads that determines whether we feel thankful or offended.

Whatever rudeness comes this Thanksgiving, getting mad at people’s impoliteness is an exercise in futility. People say what they say – and often don’t think twice about it.

Our focus should be on what we say to ourselves after we hear these comments.

There’s a woman in the outskirts of my social circle that I see a few times a year. Each time I see her she pulls me aside and exclaims, in her best southern way, how good I look. (With an emphasis on the good.)

I want to ask her what she was expecting. I have a sneaking suspicion she expects to see me up 100 pounds and incapacitated in some way (through alcohol or otherwise).

And I just laugh. I notice what I’m telling myself about her comments, and I say “Thank you – I’m feeling good”.

I give thanks for rude people.

Because their comments, well meaning or otherwise, gives me a little insight into what I’m telling myself.

Which is way more important than what other people are telling me.

What will you do the next time someone says something rude to you?

Whatever you say back to them, I invite you to look at what you say to yourself.

Because that’s truly what matters. 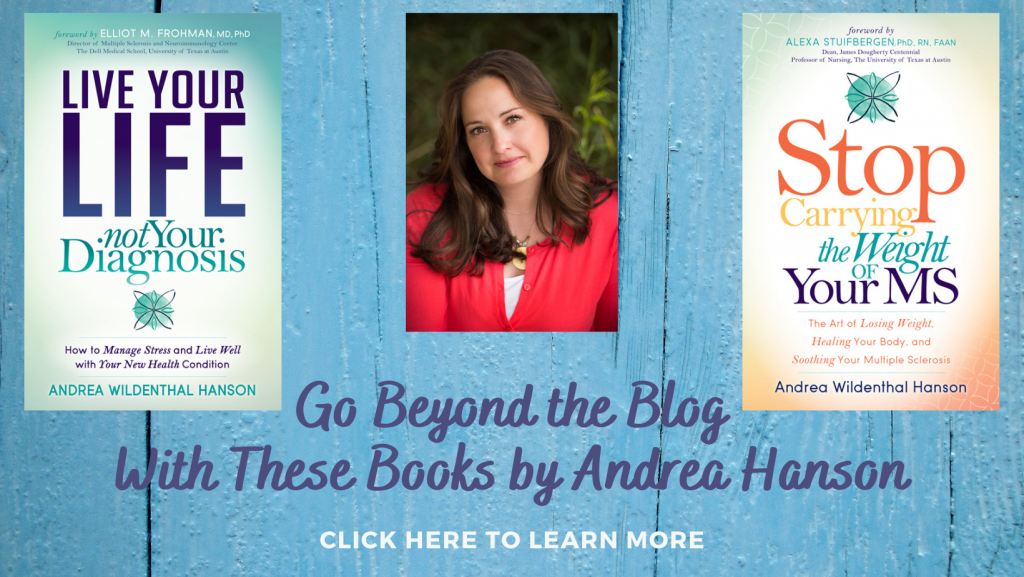