The Cardinal Rule For Working Out 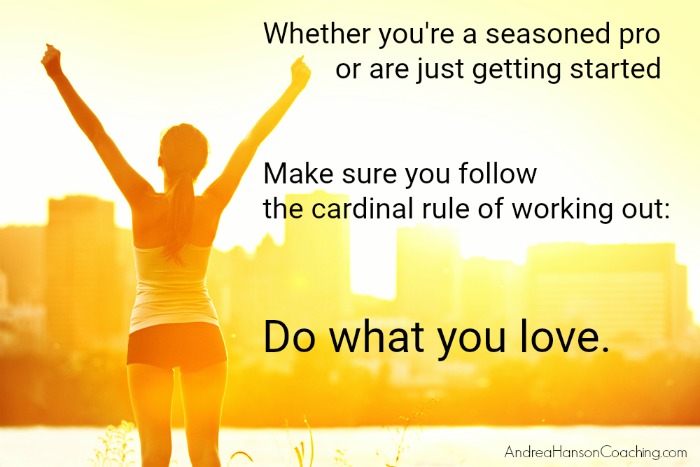 Follow this one rule to make working out for life easy.

I have a confession.
I’ve been breaking my own rule for the past few weeks. Not deliberately, but I was gradually crossing further over that line.
Until I finally snapped out of it and had to ask myself what the hell I was doing.

There’s a fantastic jogging trail by my house. It’s home to cyclists, joggers, and walkers (many with doggies in tow) from the surrounding neighborhoods. It’s a great little community that I see in the mornings when I go for my run. I love it and love the experience of jogging outside in the elements.

Only I live in Texas. In August, the elements heat up to ridiculous temperatures.
It’s just hot- even at 5 am. Like bake cookies on your dashboard hot.

So these past few weeks, I’ve taken my running to the gym. I knew running on the treadmill would be different than being outdoors, but I would adapt in order to keep running through August.

I mean, how hard could it be?

I soon realized that the treadmill is a different animal. You are propelled instead of pushing off. You have to constantly be aware of your speed and what you’re doing. And if you’re not? You stumble. Apparently a lot.

By the end of my fourth or fifth run on the treadmill, I was going nuts. I continuously felt like an idiot because my tendency is to zone out when I run- which means quite often I’m caught in a stumble. Nothing makes you feel like a klutz like breaking a fall on the treadmill and then hanging on so you’re not shot backward. (I’m sure it looks as cool as it feels.)

I was left totally unfulfilled by my workouts. Yes, it’s still a good workout when you run on the treadmill (some people love it). But not me. I was unhappy. My gait felt awkward, I stumbled and wasn’t able to get into my running zone over those two weeks.

I wanted to quit.

Getting up early to run got harder and harder. My motivation and joy for running got sucked out of me each time I went.  I dreaded getting on that machine.
For the first time in a long while, making myself work out was hard to do.

What was so different? Why had my feelings about running gone from love to hate in such a short time?
It’s not the treadmill’s fault.  It was all me.

I was breaking my cardinal rule of working out.

Do what you love.

I made myself do something that I just didn’t enjoy.
Told myself that I had to keep running because I like it – ignoring that it wasn’t feeding my soul anymore.
I told myself there’s something wrong with me because I couldn’t figure it out.
And I thought that the alternatives weren’t good enough so I kept doing it.

These thoughts are a workout killer.

This happens a lot. As humans, we’re so adaptable that we can will ourselves (be it not for very long) to do a workout we just don’t like.

Doing something you hate can feel like swimming in mud. It can slow down your progress, your performance and ultimately kill your drive to do any workout at all.

When you’re making yourself do something you don’t like, it’s a big, hairy uphill battle. It’s no wonder that so many people hate to work out.

Once I realized my truth – I hate running on the treadmill- I felt much better about the whole thing.

Not that I went back to that treadmill.
No thank you. That ship has sailed.

But honoring my truth allowed me to look at the alternatives. Things that would be just as challenging – and that I liked.

Once you stop the struggle, your mind opens up to all sorts of fun and challenging things to do.

Because your attention is no longer locked in on that one workout you hate. You can lift your head up and see just how many things are available around you.

There are a gazillion things we can do to work out (I’m pretty sure that’s a fact).  It’s not supposed to be grueling. It doesn’t have to be tough.
A good workout out can be enjoyable – even fun – if you let it.

As for my August, I’ve been enjoying an unseasonable cooldown and went back to my beloved jogging trail. The treadmill is no longer my nemesis. I can even appreciate it (at times). And when the temperatures shoot back up to 106, I already know what my inside workout will be.

Whether you’re a seasoned pro or are just getting started, make sure you follow the cardinal rule: Do what you love.

Because exercise is not just for the summer or when there’s a goal to reach.
Exercise is a lifelong project.
And life is too short to do something you hate.